Today I finished two of my projects that I set out to complete during my time of work. As my holiday comes to an end I suddenly feel the urges to get things done so that I can have something to show. I have a few ficus trees that I have been growing from cuttings. I decided to use these cuttings and do some experiments.  Below I will be sharing my two experiments with you.

I have taken a few cutting of a ficus I featured a while back in a blog titled “Ficus progression: A tree that defines the norm“. I like working with these type of trees as they give you great results in a short period. I pruned the Ficus a few times last year and every time after I was done while busy cleaning up my work space a few of the larger cuttings tend to find there way into containers. I ended up with about 18 short cuttings and 12 long ones that have started to grow strongly. I wanted to plant a forest planting but I could not find the right container.

I decided to plant them on a rock.

Here is a close up of the trees over the rock. 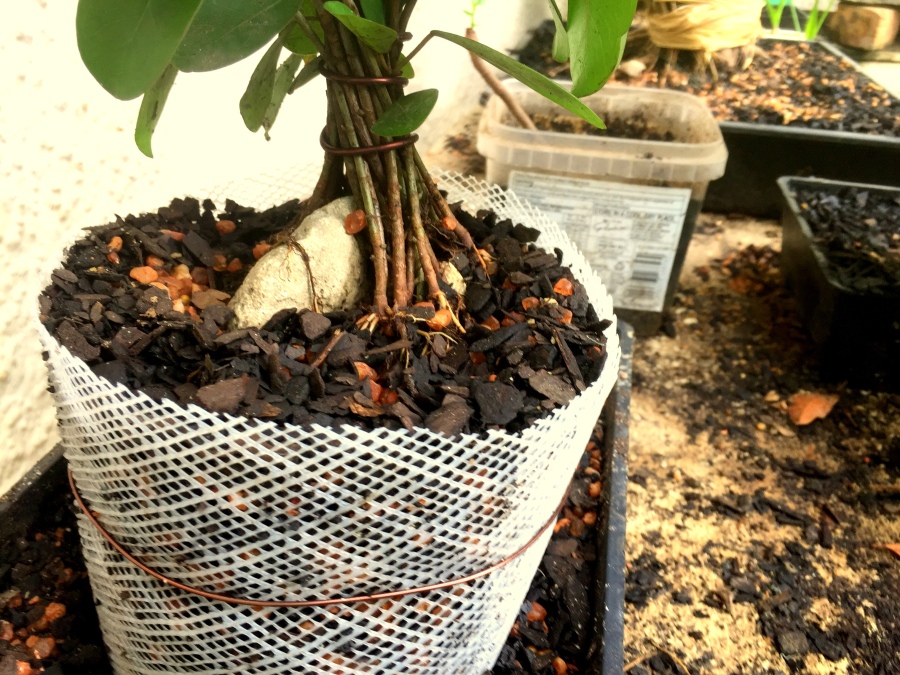 I had this great plan of how I will place the trees on the rock and  I even made a mold out of some old news paper that I can use as a guide. As all things in life goes there some curve balls. The first thing that went wrong is that I could not get the trees to stick to the mold.  I used wire to secure it but then I realized that once the trees start to grow it would not be practical to remove. I run out of raffia so that plan would not work.

I ended up bunching all the trees together and wrapped them with a piece of wire. Now I just need to wait and see if my plan worked.

I have two cuttings for the Ficus Benjamina that I collected after restyling a tree that was in bad shape. The tree was throwing of its leaves and most of the foliage on the tree was a off yellow color. For the tree to survive I removed two big branches and planted them in a tray. A few months later they have formed roots and both are growing strong.

I’ve been waiting for some time to style these two. Here are a few photos of the forming process.

Here are the two trees before I started.

Here is a photo of the first tree all wire and ready to be styled.

The first tree shaped and repotted into a growing container.

I tried not to remove any foliage or roots during the repotting as the tree is still very young. I will give an update on the other tree later.