My holiday was ended and I’m back at work, but before I go back into just doing basic maintenance on my trees. I have one last project that I would like to share with you.

In this blog I will be showing how I went about making my first Ficus Raft style bonsai in training… Raft style? This is one of the styles that I find in forests around the area where I live more often then most of other bonsai style. It occurs when a tree falls over and lands on the ground. The branches on the side that is now on the ground forms roots. The branches on the top side of the main trunk of the original tree reaches up and forms new trees that are linked to one root system. Some of these trees can be very pleasing to the eye as you can image a rugged landscape or a lines of trees clinging to a steep cliff, all this in one tree!

So if you have a tree that is well developed and died of on the one side, or if you come across a tree with nice branches but they are all on one side. This is a style to consider. It’s not something that is used as often but if done correctly has a majestic feel to it.

This tree was a cutting that I planted a while back (two years ago not really sure). I left it to grow and I ended up with this long trunk with not much movement. After I considered the pro’s and con’s if I were to remove the top leaving just a stump and then grow new branches on the stump which would not take long. I was not sold on this idea. I rather liked the long trunk.

I planted the tree in a large seedling tray and bent the tree over into another seedling tray. I would rather try something new then cut off half of the tree.

Here is a photo of this tree bent over into another tray. This is the tree a year after I bent it.

I will now be cutting the tree into two trees. 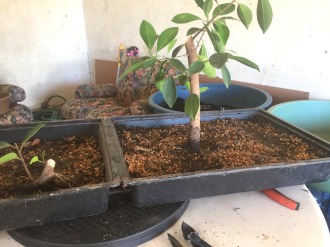 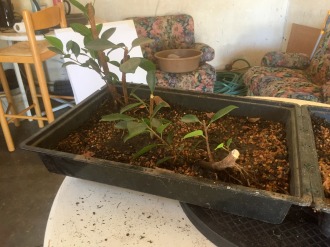 After I separated the two trees from each other I replanted the one that I wanted to use as the raft style tree into new growing medium. The reason for this was, the placement of the tree in the tray forced the roots to grow only on the one side. There were no roots in the side where the tree was bend down originally. 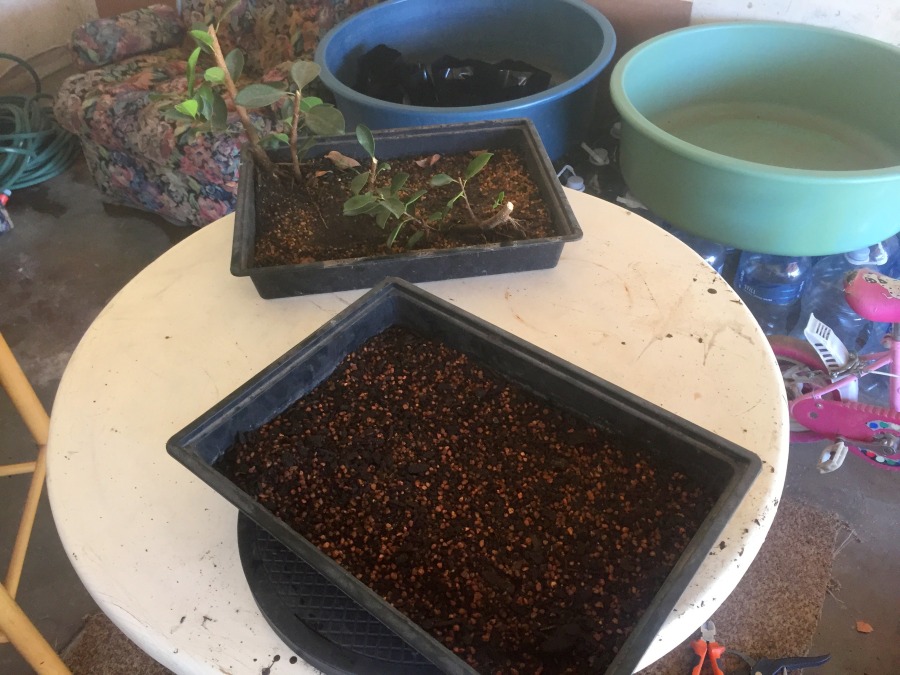 As I was replanting the tree into the new tray. I wanted more movement in the main trunk. After trying to bend the trunk a few times I applied a old trusted technique. I had to make cuts with a saw in the trunk to get the tree to bend. I learned something new: After a year underground trunks do not bend easily even if they are thinner than your thumb. On the right of the photo below you can see the side of the tree that produced no roots as this was the side where the tree was right up against the edge of the seedling tray.

In the last two photos you will see the final replanted tree as well as all the foliage I removed.

In a few months from now the roots will have filled the container. Next year this time I will be replanting this tree once more working on the roots and the level of the trunk on the growing medium.