I feel a bit over come with emotion today. I potted a Juniper into a new pot after almost a year of just letting it grow. I toke this tree to a friend to discuss the health of the tree and he showed me a few things that can be improved on. The first thing that he mentioned was that the tree was growing but it is not doing well. The soil mixture that the tree was is was not the best. It is to dense so water does not penetrate into the root system and if it dries out there it take a few sessions of watering to get the soil damp throughout the entire container. What I wanted to change to improve the health of the tree. Firstly I needed to change the soil mixture that the tree was in. Next I wanted to plant the tree at the right angle as it was styled initially. I styled the tree as part of a young designers competition. I had a few blocks that I used to angle the tree for the competition, but when I got back home it was difficult to care for the tree at an angle. So I left it as it was potted and maintained the trees shape like that. After a few months I noticed that the lower left branch of the tree was not doing as well as the other branches. I then read a few articles on how to care for trees with low hanging branches and cascades. I then placed a shallow bowl of water under the branch to keep the air around it more humid and to reflect the sunlight on to the trees branch. This was a time consuming way to care for this tree. I needed to change the water in the bowl regularly and clean the bowl as slime and other things build up on the edges and dust settled at the bottom of the bowl. As if that was not enough work, with this drought we experienced the water kept on drying up and the birds bathed in the bowl splashing out the water rolling around in it then drinking it. Smiley face… I do not mind caring for animals but I could not keep this up.

Here is the plan I had in mind to address this issues. 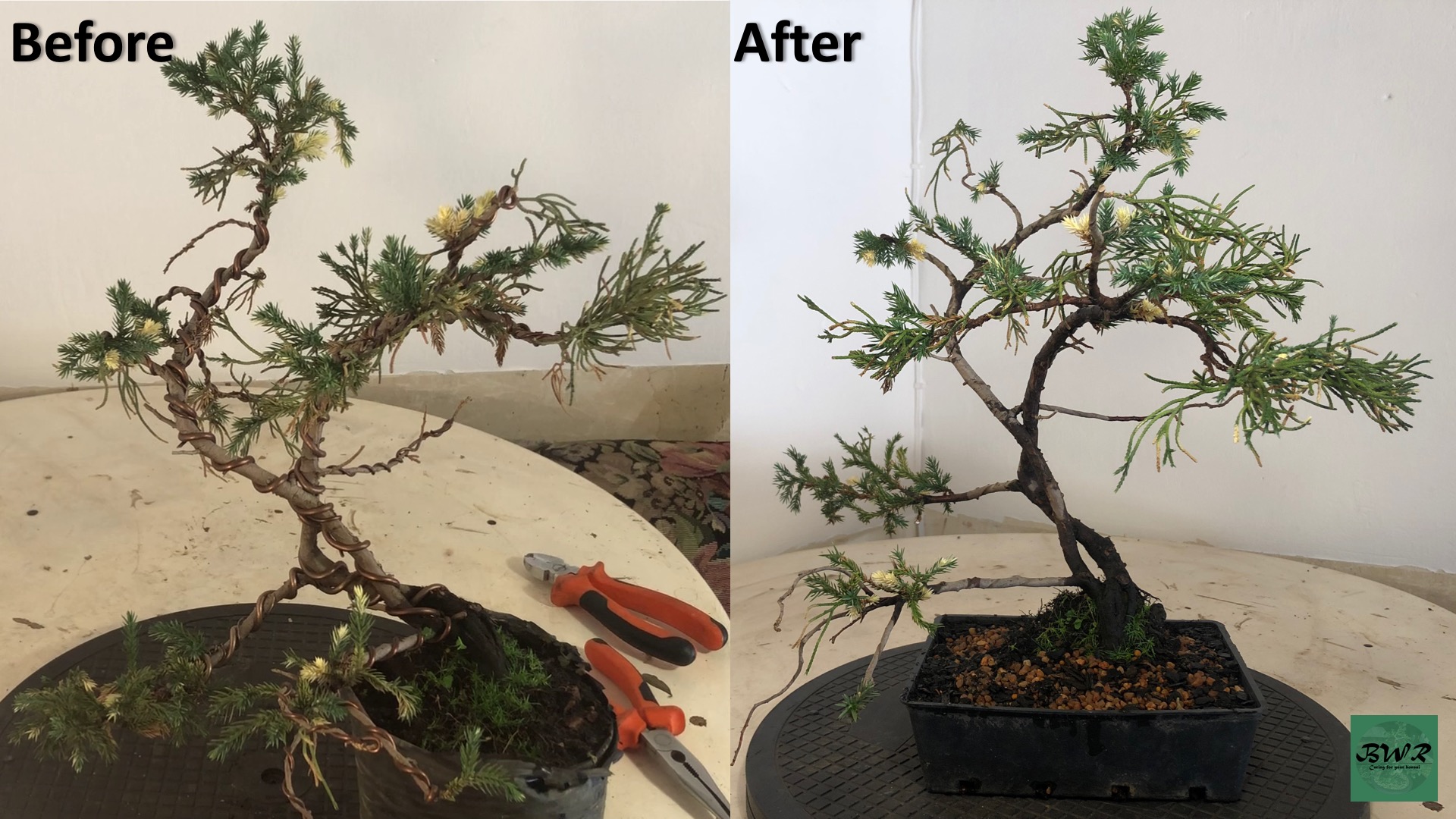 In the photo above you can see that I removed the wire I applied to the tree. I did this as the wire was starting to cut into the trees bark. I learned another valuable lesson during this process. If you look carefully at the tree after I removed the wire there is a dead branch on the right of the trunk in the curve that was placed as a back branch that died off. There are two reasons why this could have happened. The first being that the branch was bend to much and the micro fractures in the bark was to deep or to many at one point so the branch was ringed thus not allowing any sap to flow through the branch. The second and most likely one of the two was that the wire applied to the tree was heated by the sun and this burned the tree. Thus causing the branch to dry out and die. 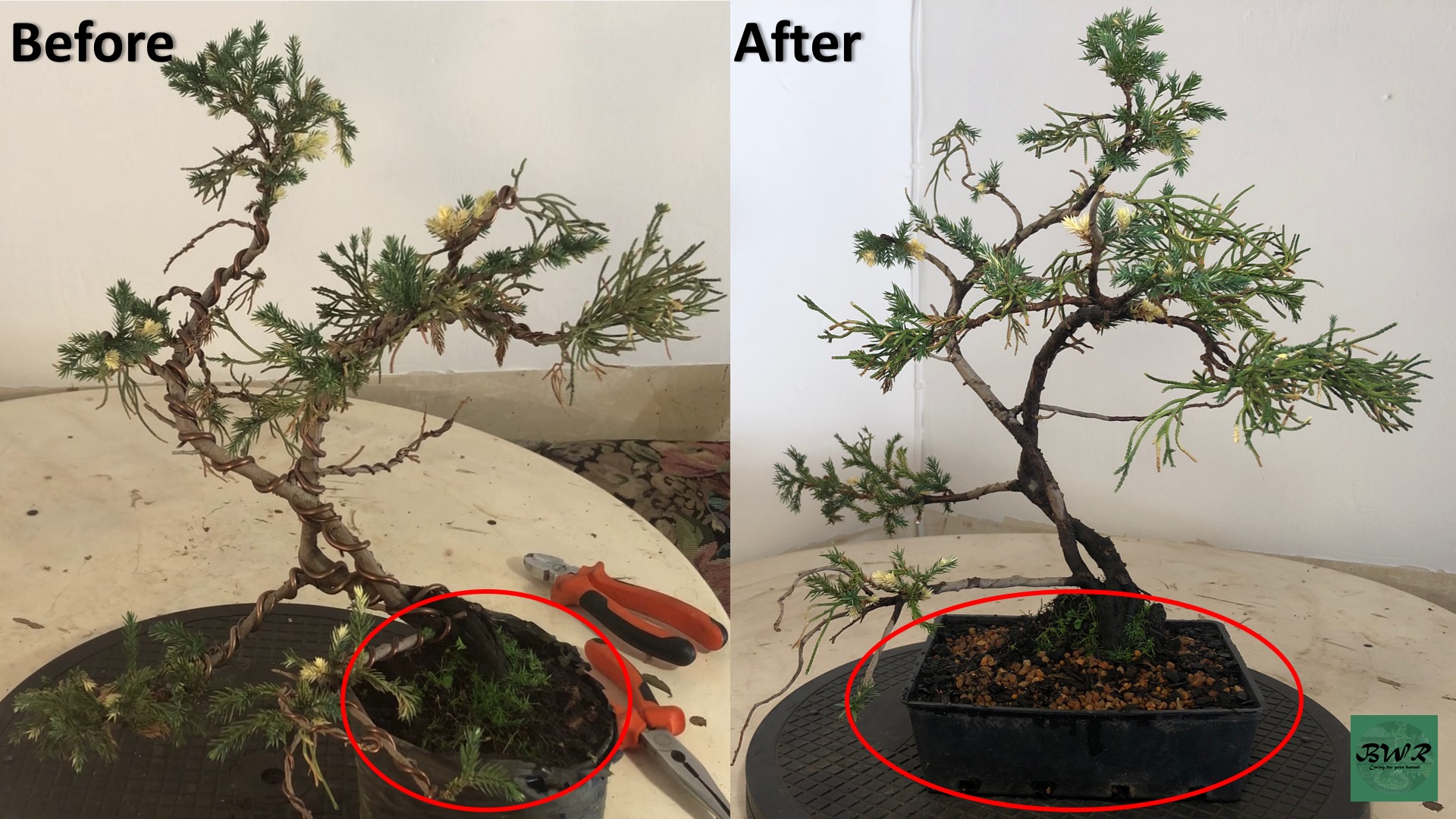 In the photos above I just wanted to illustrate the slight differences between the before and after photos. The shape of the tree was change and the visual weight shifted to the right. You will also see that the soil mixture and the container changed. The new container is a bit bigger than the older one and it is shallower. This will help the tree gain more roots and force them to spread out more to help with root flare at the base of the tree. In the illustration above I wanted to share my vision for this tree in a more visual way. I want to drop the branch to the right more to give a bit more separation between the apex and the branches. This also allows you to see the movement in the trunk more. The second branch to the left will be bend to the back a bit more to create depth. I’m still in two minds about the lowest branch of this tree. There is a strong chance that I will jin it but for now I will leave it there to help thinken the trunk and by leaving the branch it will be aiding the tree with recovery.

I know that planting a tree in a new pot during autumn is risky but I have no other choice. The tree is not responding as it should and if I wait I may lose branches. In our climate we do not experience very cold winter and we get generous amounts of sunlight. Temperatures fluctuate between low twenties and high teens. This is measured in degrees Celsius as I know some other countries use Fahrenheit.

Here is a video of repotting.