This weekend was a very busy one. I spent most of it carving my huge Australian Bush Cherry that I have planted in a old water fountain basin.

Is tree has been in my care for six years now. Every branch on this tree was grown in place. There where no branches on this tree when I first got it. It was one of two trees I bought for R850. I was a bargain and I could not let it slip through my fingers. This was one of the things at that time that made my stomach turn. I wanted the trees but I only had R1000 in my bank account and the end of the month was still far. I made an executive decision and was hoping that my wife was onboard with it. Luckily for me my wife is a very understanding person when it comes to me and my bonsai addiction or so I believed… She would always says that it’s your money and you can do what you want with it. She says it in such a tone that makes one wonder if shes really onboard and if she is trying to trick you. So by “just doing it” cause I’m a Nike kind of guy I avoided this “statement”. Upon getting home I just say I bought two trees for R850 that’s better than getting into a discussion as to why I think it is necessary.

I wrote a blog on the other tree not to long ago:

Funny enough it was a carving blog as well. When working with trees that you start from stumps I always seem to find that carving is required to enhance the trees features. The tree I worked on this weekend had a very nice piece of dead wood straight down the middle of the tree. I have taken my time with hollowing out this deadwood year after year. It’s been a long timely process. This weekend I could finally gather all my courage and joined the two dead wood features via a tunnel from the end where a root was removed all the way to the deadwood that ran down the middle of the tree.

Before I could start working on this tree my first challenge was getting this huge tree out of my bonsai garden. It was a cold and windy day so there was no one out in the street that I could call to ask them to help me get the tree out of the garden. I had to ask my wife and daughter to assist me. We tried lifting the tree. My wife and daughter could not lift their side of the pot. That was the end of that idea. It was back to the drawing board for me. As I child I use to watch a lot of television programs about science and early discoveries. They use to to play the same episodes over and over again. I remembered a episode on how the modern wheel was invented. They showed how a caveman pushed a big rock on a set of logs. This struck me as something that I could make with a few extra metal tubes that was left after I build a bar to flight lighting from at a school.

Here are a few photos of this journey from the garden to the garage. 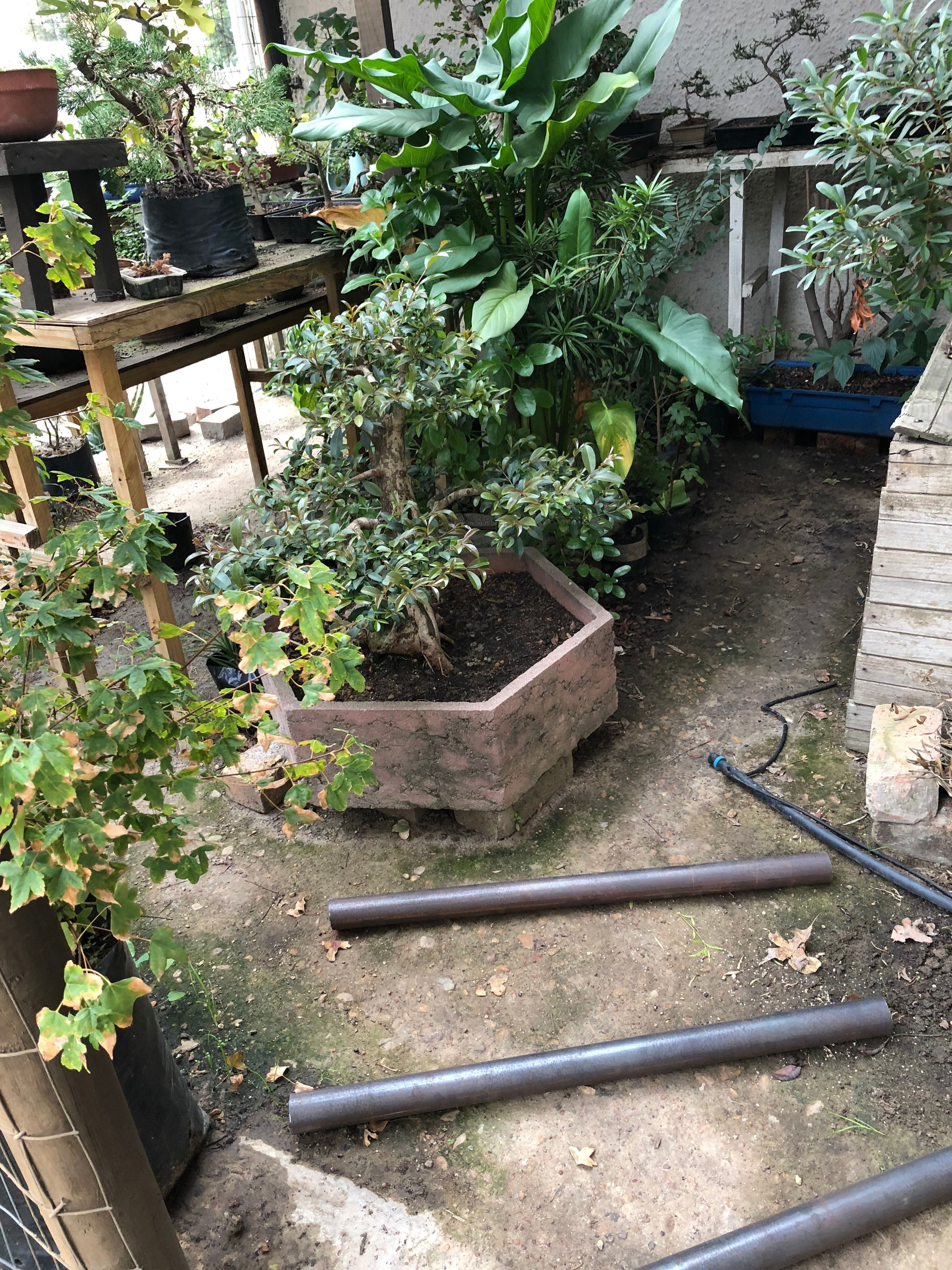 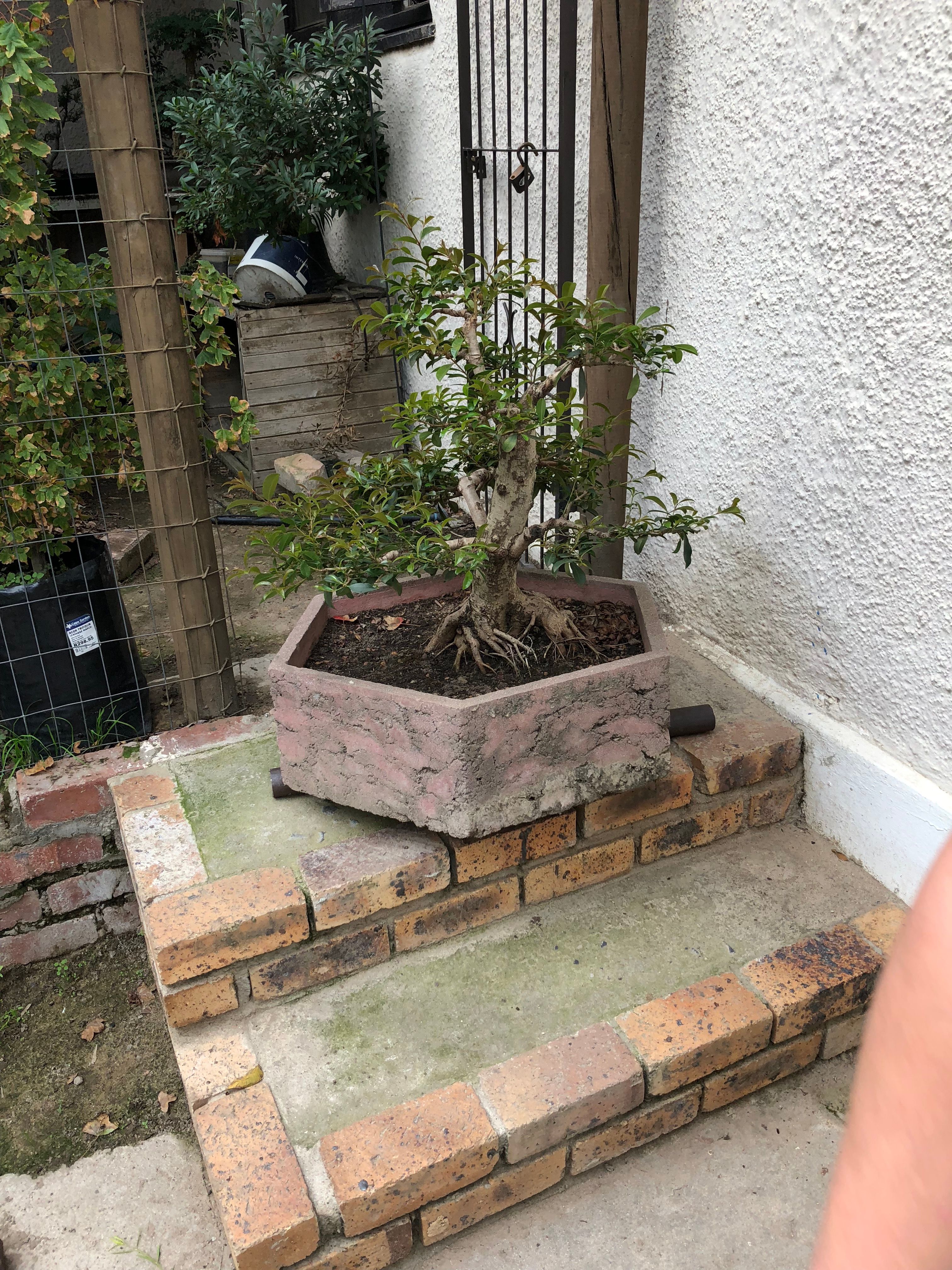 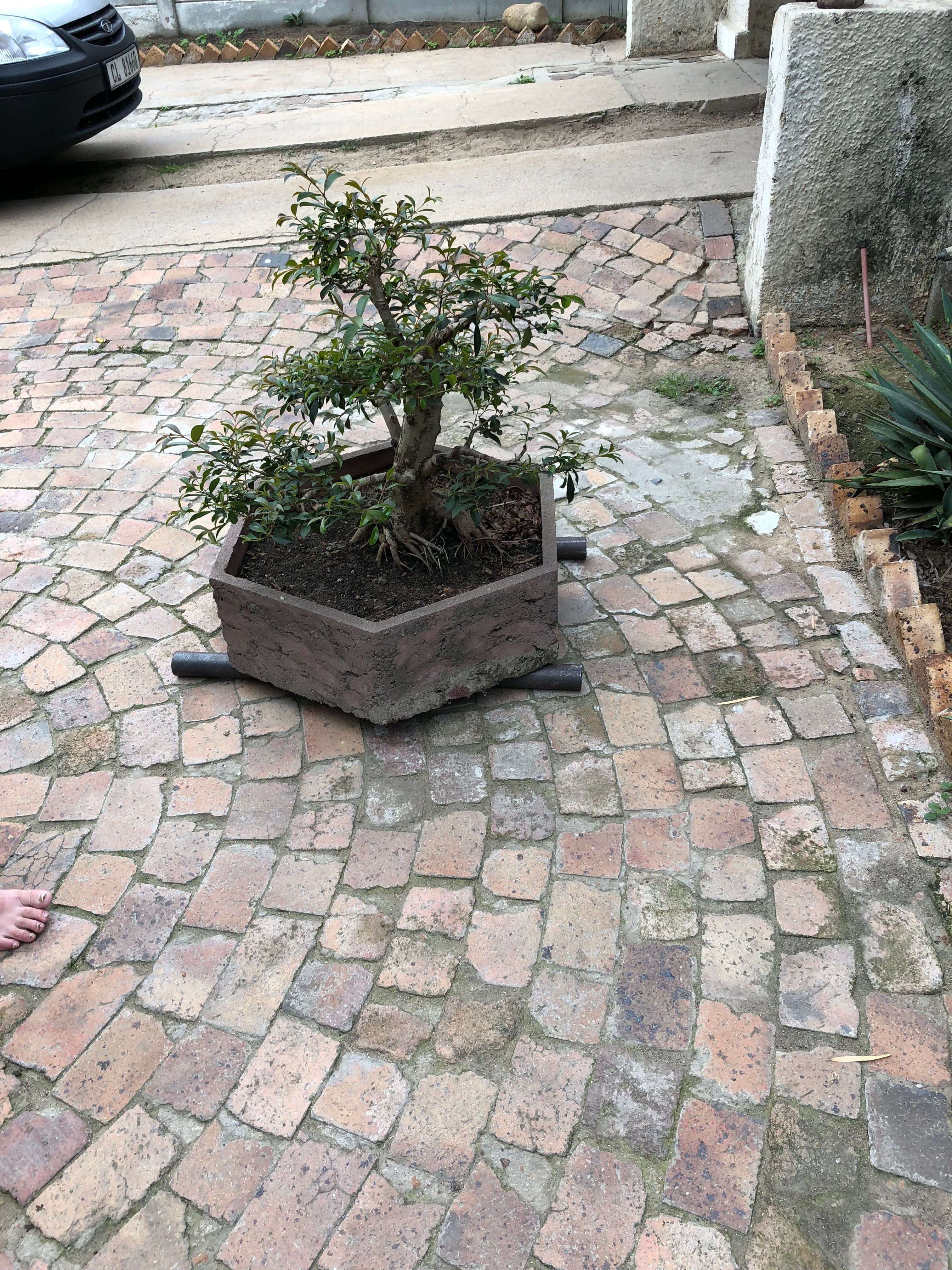 After that was done I put a few bricks under the tree so that it was a bit off the ground. I like sitting on my little chair and being comfortable when working on my trees. This was the set up for the shoot. I always try and get the best possible photographs with as much detail as I can get so that you can see what I did every step of the way. I focus so much on getting the perfect lighting for the videos that I forget to take before and after pictures. Most of the time I need to go back and look at the footage and take snapshots of the video. Videos have about 60 frames per second so getting the right one often takes time.

Here is a photo of the top part of the tree where I did some carving to make it look more natural. 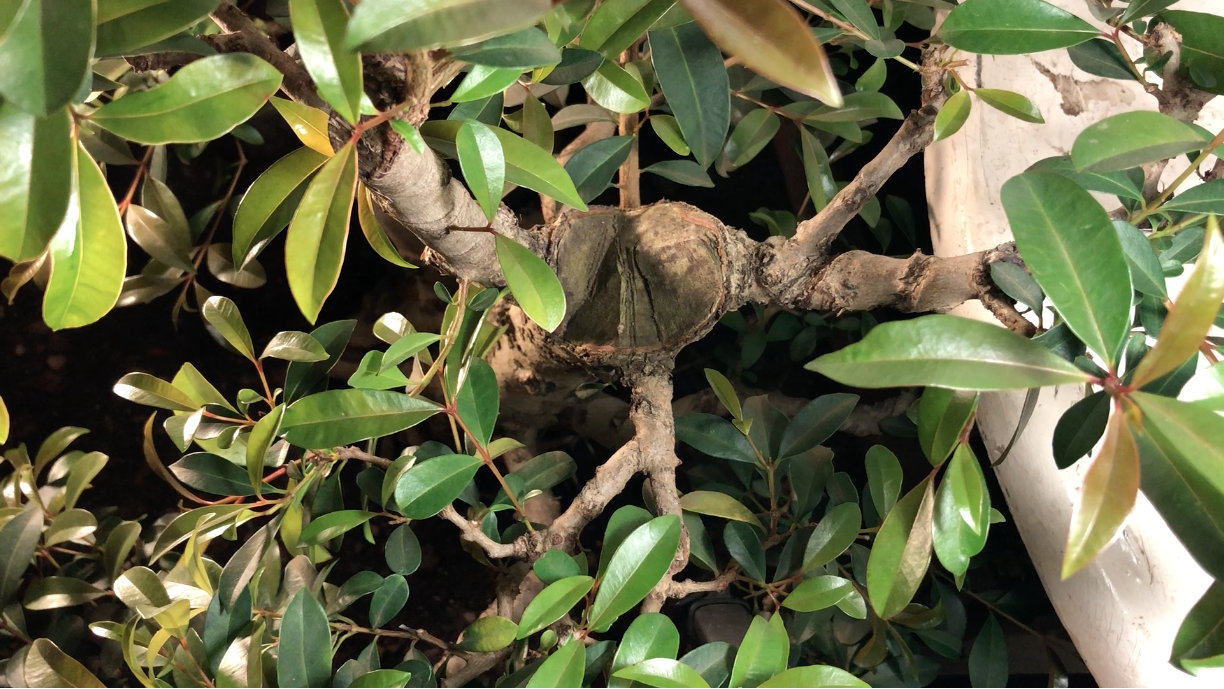 Here is the top after I carved it. As you can see the tree was shortened a while back and I lifted a side branch to form the new apex. I had to cut the tree at different angles to make sure that I did not scar any of the surrounding branches. I then left the wood to age by itself for a year. After I carved it you will see that the surface is much smoother and that it looks like the tree was chopped off and aged naturally. One can never recreate what happens in nature but you can try and hide ugly scares by carving them into more interesting looking scares.

I moved on to the next phase of carving the lower part of the tree. This was the tree before I started. As you will see there was carving done on the tree prior to the work done this weekend. 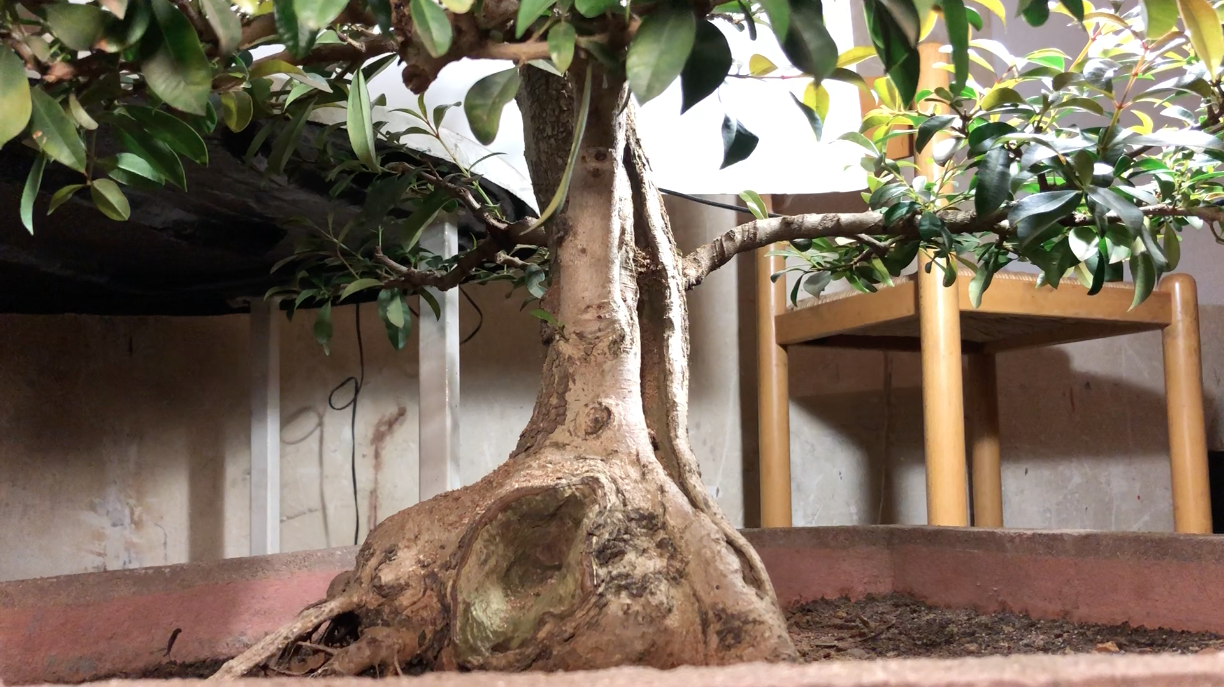 This is what the carving at the lower part of the tree looked like at the end of day one. Not much difference. This was due to the density of the wood in the second scare. If was so hard that after every two minutes I had to stop as there was smoke coming out of the tree. The bits that my little dremel uses is also very fine and the grooves are close to each other. As the bits turn they get fulled with pieces of wood. This than causes the wood to burn as the friction between the hard wood and the wood stuck in the bit heats up.

I then moved over to a normal drill the second day to get the bulk of the heavy drilling done. 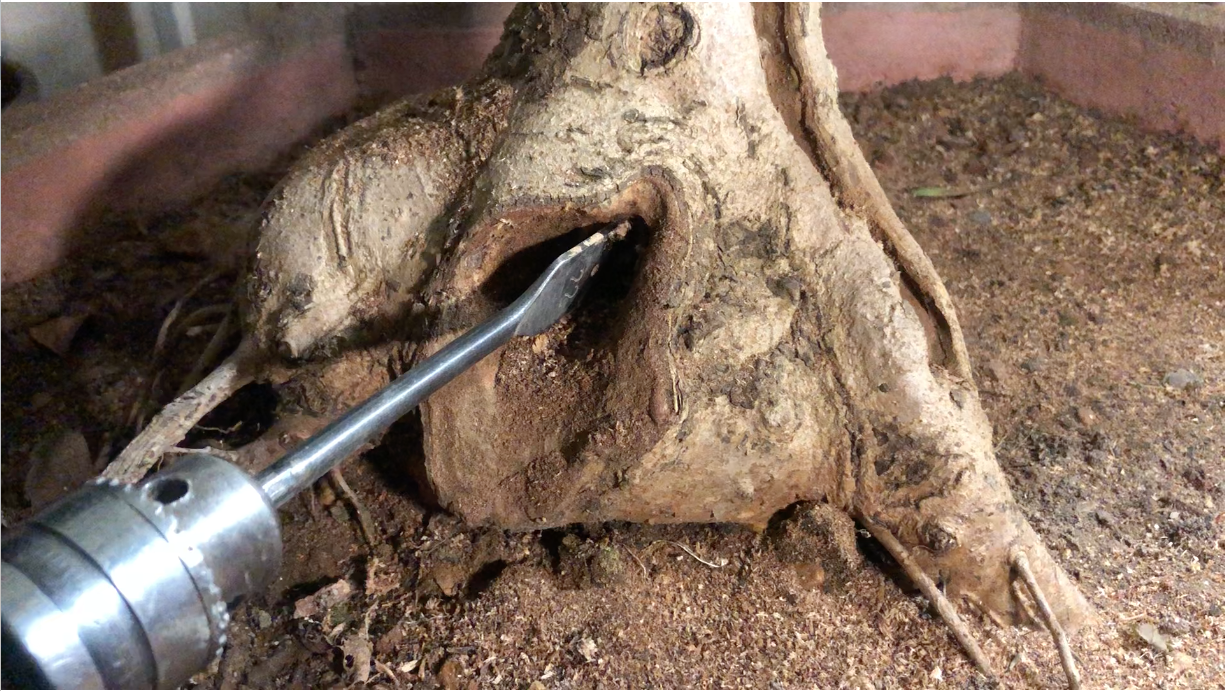 With in no time I had more work done than the previous day. The results where amazing. I first used a twenty two millimeter speed drill to widen the tunnel. I then proceeded to use a ten millimeter wooden bit to even out the edged and make the tunnel look less like a symmetrical tunnel. After that it was back to my trusted dremel to smooth out the remaining uneven edges.

Here is a photo that shows the tunnel that links the two scars. 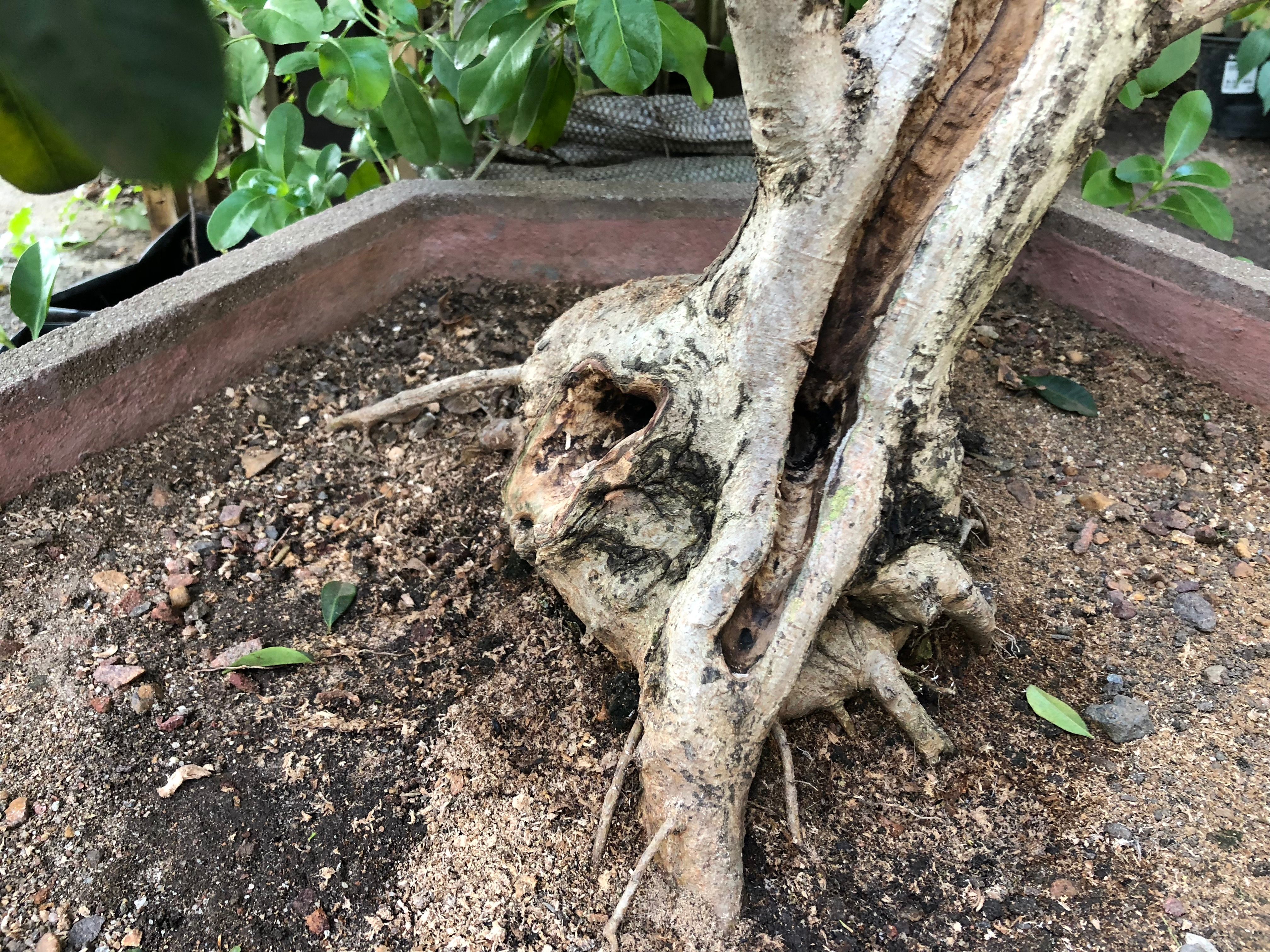 Now that the carving was done. I looked at the tree and I could not see the deadwood. So I trimmed back the long shoots to encourage the tree to back bud. These trees love to sprout new growth from every part of the tree. I would like to get some leaves closer to the trunk. If I allow the branches to grow out to long it will lead your attention away from the trunk and the deadwood. In the photo above you can clearly see more of the trunk line. This was taken after all the trimming and carving was done. 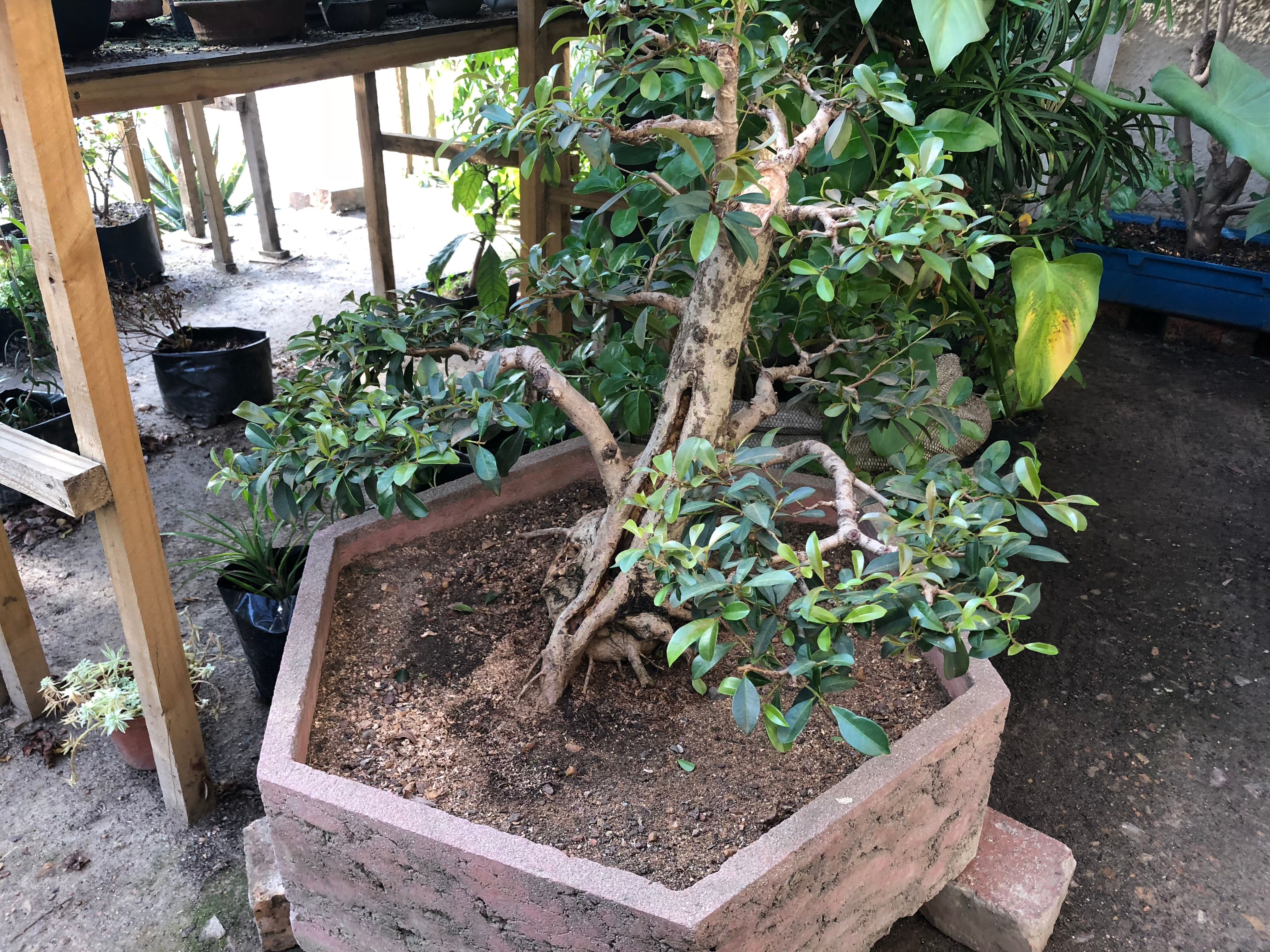 Here the tree is back where it belongs. Safely behind bars…

If you want to see the full journey of this tree in a time lapse please click on the link below.